Bus Routes to Our Office

We stand for the fair and equitable treatment of all people. Read more...

While in college, I had the opportunity to take the class Human Livestock Handling from Dr. Temple Grandin, an animal behavior expert and advocate for autism. If you do not already know who Dr. Grandin is, I highly recommend you watch the movie “Temple Grandin”. In the film, Grandin overcomes prejudice against autism and changes the world's view of how livestock are handled. Because of her autism, she is able to view the animal handling practices from a different perspective and understand animal behavior. It is a great movie for everyone, rancher or not.

While attending that class, I gained knowledge on why and how livestock react in certain situations. One of the variables that affects livestock handling is the Flight Zone. The Flight Zone is the distance at which an animal flees from another animal or human (See diagram 1). The Flight Zone is relative to fear. When someone enters a grazing animal’s Flight Zone, the animal will move away due to not trusting that person. Pets and tame livestock do not move away as they have trust in that person and have no flight zone.

There are various factors that affect the Flight Zone. Those factors include: 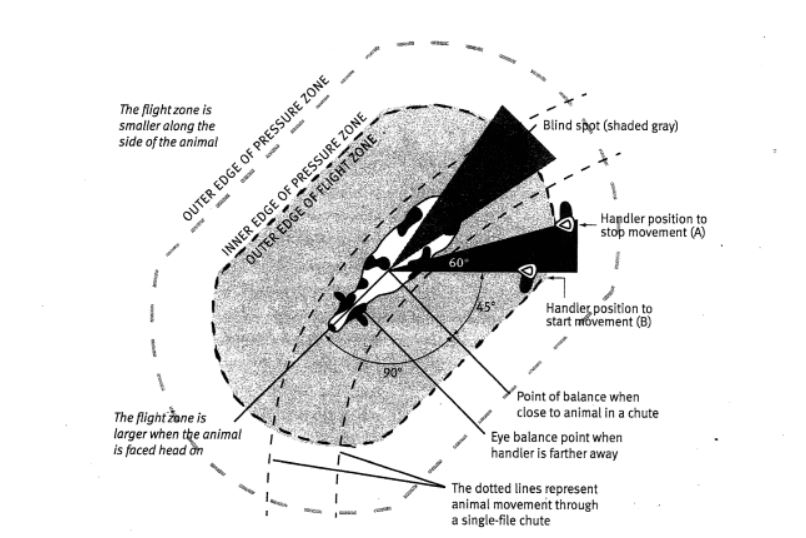 When you stand behind an animal in their blind spot, they are unable to see you. When the animal is unaware of where you are, it will cause that animal fear. This can result in the animal running off or turning around to face you instead of moving in the direction that you wanted the animal to go.

Now that you better understand the basics of the flight zone, it’s time to herd your stock. An easy and effective method is the Zig-Zag Method (Diagram 2). The handler moves in a zig-zag pattern behind the animals without moving forward. The movement should not exceed the size of a quarter circle. If you curve around too far, you will exceed some animal’s POB causing them to walk in the opposite direction of where you want them to go. The movement should be continuous. If you stop or slow down too much, you may be in one animals blind spot for too long causing them to flee. If you have a straggler, do not chase after it. Herd animals like to be in herds, so they will eventually seek the safety of moving back with the group. Once the animals form a loose bunch, you can start moving the herd forward. Keep the continuous zig zag movement but apply slight pressure to the animal’s flight zone to cause them to move forward. Use the pressure and release method to control the speed of the animals’ movement (Grandin). Watch this video here for a visual on what this looks like in a pasture. https://www.youtube.com/watch?time_continue=25&v=ZZyFRRn--jk&feature=emb_title 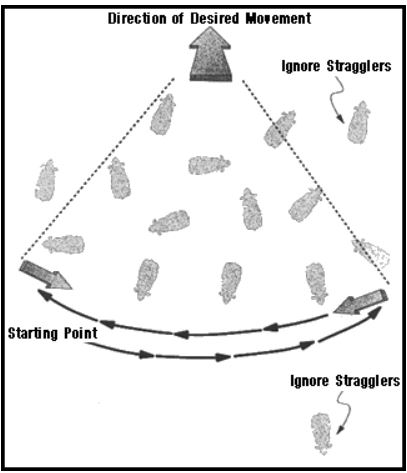 Information and Diagrams were summarized from the book: Human Livestock Handling-Understanding Livestock and Building Facilities for Healthier Animals by Dr. Temple Grandin with Mark Deesing.